The face of a Murderer 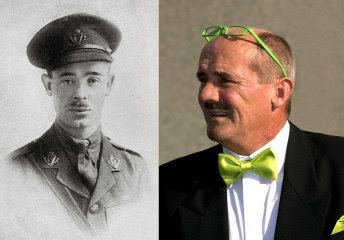 Actor Brendan O'Carrol is most famous for playing his alter ego, Mrs Brown.  But his most recent screen time has been on an episode of the BBC's family history programme, Who Do You Think You Are?

Brendan, who hails from Dublin, always knew that his grandfather had been murdered in 1920, and that his family always believed that he had been killed by the British military.  I'm not going to spoil the show and give details, and those details are not necessary to the point of my post.  So I'll leave it to Brendan and the BBC to tell his story in full. It's well worth seeing if you can catch it.

I have no connections to Ireland, no known Irish blood, no allegiance to Catholicism or Protestantism. But I grew up in England in the 1970s, knowing that Irish nationalists were planting bombs in my country to kill me and my fellows.  The risk to me, living in rural England, was remote, but it forged an allegiance to the British side of the conflict, if for no other reason than pure self-interest.

In my adult years, as a student of human nature, I am cautious of simplistic fallacies such as "our side is always honourable", and was fully accepting when the truth about the 1972 Bloody Sunday massacre finally came out, and David Cameron apologised on behalf of the nation.  But still, no prosecutions have been successfully brought.  And no closure process has been entered into, like the Truth and Reconciliation process which followed the end of Apartheid in South Africa.

Brendan achieved far more than he hoped for in tracing his grandfather's murderers: not only did he establish a motive and method, but he even identified the man who pulled the trigger - his cold face stares from the photo above. The motive was not noble, indeed it was not worth a man's life. And it is revealed that the killer lived a full life following his many crimes, and died having never faced justice.  This is not the closure I would want in Brendan's position. He has no formal justice; no apology from a representative of our nation, which sent a cold, ruthless murderer to kill of our behalf. As much as I'd like just to put my arm around Brendan and express my sorrow and regret for the loss of a grandfather in his life who was taken on behalf of my forebears, I can't do that. But in bringing this story to light, in telling us all what happened in those dark days of 1920 in Dublin, when so much violence and hatred was rife, he brings dignity and a different kind of justice to his family - the justice of truth being told, that we may know what has been done on our behalf, and hold to account our leaders for their actions now and in future.
Posted by Billysugger at 23:23