Now we're going to consider the energy in an orbit, and we'll consider two forms of energy: kinetic energy from the speed of motion around the central body; and gravitational potential energy by virtue of the forces in a gravitational field, (which we'll call gravitational  energy for short).

Kinetic energy is easy, and from high school physics I remember it is given by

But from our equation [1] we found that in a circular orbit,

So in such an orbit,

Now gravitational energy is a little harder to understand.  It is the work done by gravity to bring a body from infinite distance to a radius r from the central body.  At each step along the way, the gravity from the central body applies a force of GMm/r².  At each step dr along the way from infinity to r, the work done is the force GMm/r² multiplied by the distance dr.  And we add all those steps together by integrating the force from infinity to r as follows:

If calculus puts you off, feel free to take my word for it and skip to equation [3]

This too is an important equation and we'll call it [3].  Just take a moment to consider what this means: the gravitational energy of a body in circular orbit is proportional to the masses of the bodies, and inversely proportional to the distance between them.  But it has a minus sign, I hear you say.  Yes indeed, and that means that gravitational energy increases (becomes less negative) as an object is lifted away from the central body.  That fits with the idea that energy is required to do work in lifting the object.  It also has some convenient consequences for orbital mechanics which we'll see later on.

Now that was the hardest piece of maths we'll do in this series, and there is no further calculus at all!  Whether you followed the integration or skipped it, please go back and make sure you understand these two energies because they lay the foundation for truly understanding orbits, and all kinds of interplanetary travel.

To wrap up orbital energy, we'll add kinetic energy and gravitational energy together into a single value.


Notice that orbital energy is negative, and increases in value as radius increases.  It's as though this energy represents how far the body is located down into the gravity well of the central body.  And if you imagine raising this energy past zero to a positive value as representing the orbiting body climbing out of the gravity well, then this will lead nicely on to the concept of escape velocity which we'll cover next time.

That's enough for this post.  Next time we'll consider how energy oscillates between kinetic and gravitational energies in elliptical orbits, and look at escape velocity.
Posted by Billysugger at 21:44 8 comments:

This post is an aside.  Here I show how to prove Kepler's third law of planetary motion from what we have done so far.  Nothing which follows depends on it, and if you choose to skip this post then you will lose nothing of substance from the series on Orbital Mechanics.

the square of the period of a planetary orbit is proportional to the cube of its distance from the Sun.

In one orbit, the orbiting body travels a distance equal to the circumference of the circle with radius r.  This distance is 2πr.  So the time taken to travel this distance, or the period of the orbit in seconds, P, is given by

Taking the square of both sides gives

Putting this into the equation for the period squared gives

Now if this equation is applied to planets orbiting the Sun, then the square of period of the orbit, P², is directly proportional to the cube of the distance from the Sun, r3.  So we have proved Kepler's third law.
Posted by Billysugger at 16:30 1 comment:

Last time we looked at the kinds of basic orbits, and gave a description of how the orbiting body moves in each.  Now we will dip our toe in the maths water.

The first step is to define the parameters of the orbit, according to the following diagram. 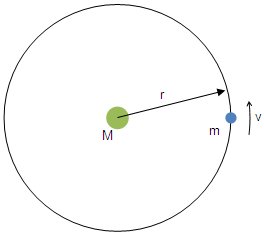 There are a few other parameters we'll use along the way:

and gravitational acceleration is given by

and because we can eliminate the /r on each side, and in a circular orbit V = VC

Example
To try this out, let's work out how fast the International Space Station (ISS) travels around the Earth.  As I remember, it's around 17,500mph.  But can our equation [1] confirm that?

That works for me!  Next time we'll take on the giant of orbital mechanics and prove Kepler's third law.
Posted by Billysugger at 20:44 3 comments:

I’m going to deal with very simple situations, as these make both understanding and the maths easier, and most real situations can be usefully approximated by these simple cases.  The central body is vastly more massive than the orbiting body, so we can consider the central body to be fixed, and just work on the orbiting body.
The simplest orbit is perfectly circular.  The orbiting body moves in a circle at just the right speed so that its centrifugal force is precisely balanced by the gravitational force between the bodies.  We will call that speed VC.
Now physics purists will tell us that centrifugal force is an illusion, so to satisfy them we’ll consider acceleration rather than force and describe the orbit as the path where centripetal acceleration is provided by the gravity of the central body.  We’ll do the maths for this in the next post.  For now, here’s the circular orbit as a diagram. 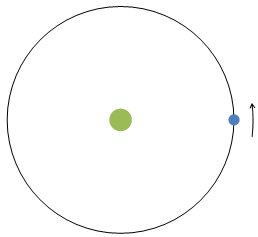 A variation of this orbit is the elliptical orbit.  If at point A the orbiting body accelerates by a small amount, (less than 41% of VC), then as it proceeds around the central body its extra speed will cause it to climb away from the circular orbit path.  As it climbs against the force of gravity from the central body, the orbiting body decelerates.  It reaches its furthest point at B, directly opposite A, and begins to accelerate back towards the original point A once again. 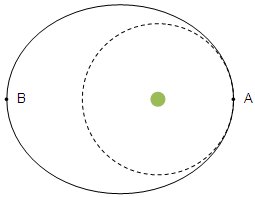 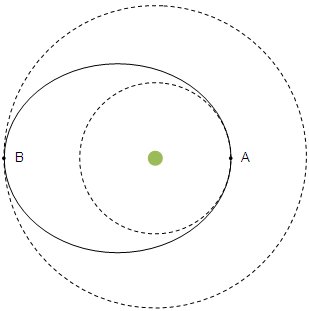 This kind of manoeuvre, where an elliptical transfer orbit is used to change between orbits of different radii, is used frequently in space flight.  Some satellites are put into geostationary orbits, where they orbit once in 24 hours and appear stationary over particular points on the equator as the Earth rotates.  When a geostationary satellite is launched, it is inserted into a transfer orbit with apoapsis at the geostationary radius.  Then a dedicated engine is fired at apoapsis to accelerate and achieve a circular geostationary orbit.  A variation of this kind of transfer orbit was used by Apollo spacecraft to reach the Moon.
Finally, if the orbiting body accelerates by 41% of VC or more, then this speed causes it to climb away as before, but this time it is travelling fast enough that the gravity field from the central body reduces more quickly than the body decelerates, and the body continues climbing indefinitely.  The body has exceeded the escape velocity, VE, has escaped the gravity field and will not return. 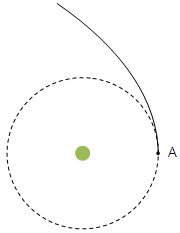 These are the basic principles to grasp for now.  Next time we will look at some simple maths to describe these different cases.
Posted by Billysugger at 22:13 3 comments:

I have been following the Dawn mission to asteroid Vesta with keen interest.  The mission team is relying on simulation data because for various reasons accurate measurements of the probe's position are only available occasionally.  The probe is expected to achieve orbital insertion around Vesta today, but without accurate data not available until tomorrow, we can only speculate on whether orbit has been achieved.

For hour-by-hour data, the team relies on the MYSTIC simulator.  This gives vital data including Dawn's speed in relation to Vesta, and its range to the asteroid.

I'm no rocket scientist, but I do have basic skills in physics and maths, and a keen interest in space flight.  A number of years ago, I worked out my own very basic system for understanding orbital mechanics, including the basic equations for simple orbits, from first principles.  I used these, with the simulation data, to show that Dawn appeared to have achieved orbital insertion around Vesta earlier this morning.

I have discussed my calculations with others interested in this mission.  It occurs to me that there may be other keen amateurs out there interested in understanding the basics of orbital mechanics.  So it is my intention to publish a series of posts on the subject.

It won't be for everyone, by a long way.  But if you have a good grasp of high school physics and maths, you should be able to follow along.  My own maths ability reached its limit shortly after high school level, so I haven't included anything too demanding!  It also won't satisfy real rocket scientists, who use levels of calculus way beyond me and can tell you all the fundamentals I've missed out.  However, if my basic version is flawed rather than just simplistic, then I'd really like to be corrected so please do get in touch!

If you're interested, keep an eye out for my following posts which detail my Orbital Mechanics for Dummies...

By the way, the title is not intended to patronize.  I consider myself to be a mathematical dummy, at least compared to the abilities of my peers when I was studying.  My aim is to use my limited skills to understand how orbits work, and how to work out their parameters.  There are plenty of more complete works on the subject, but this is intended to be an easy entry.
Posted by Billysugger at 12:04 No comments: