While planning my visit to the Winchester Science Festival next weekend, I was looking for a programme laid out as a timetable, so my family and I could mark sessions of interest then plan what we were going to see when.  I couldn't find one, so I decided to compile one.  My OCD compelled me to make a reasonable job of it, so I now have a printable PDF which can be printed on one double-sided page per day, (one side per morning or afternoon).

If you're thinking of going, feel free to download it here: WinSciFest2013.pdf

Otherwise, for a quick summary, see the table below (without photos and session descriptions).

Posted by Billysugger at 14:51 No comments:


Who has the burden of proof for an extraordinary claim?  Those who make the claim or those who challenge the claim?

At first, it is quite reasonable to give benefit of the doubt to a man who makes a claim, such as "I have a unicorn in my garden". After all, we have not searched his garden and have no proof that he has no unicorn, and it seems reasonable to take the word of a man who has not been shown to lie. So reasonably, we take his word at face value and allow that he may indeed have a unicorn in his garden.

When we visit his home, we are interested to see the unicorn, but when asked the man says he has a big garden and the unicorn isn't around the house at the moment, but it is there nonetheless. We're disappointed, of course, but we have no reason to disbelieve him.

Later the man makes a moral judgement about our behaviour, such as "it is wrong to eat wheat on a Wednesday", and when asked why this is so, the man replies that his unicorn told him so. We are irritated by such judgement, and surprised that not only this man claims to have a unicorn, but that it can speak also. So we ask to see this unicorn and ask why it is wrong to eat wheat on a Wednesday. We search the garden with the man and find no unicorn, but have no proof that none exists. When challenged to produce the unicorn, the man now claims that the unicorn is invisible, and is in all parts of the garden at the same time.

Now the man's claim is looking extraordinary for a number of reasons:
1. We have never seen a unicorn, and they are popularly believed to be fictional;
2. We have never heard an animal speak, and most people accept that only humans speak;
3. The man changed his story to suit his needs as we enquired further about his talking unicorn;
4. We have never had experience of invisible animals, and invisibility has never been demonstrated; and
5. The concept of something being everywhere at once appears contradictory.

So we conclude that on the balance of probability, the man's claim is bogus and put the onus on him to prove the existence of his unicorn.

We tell the man not to be so silly and judgemental about our wheat eating habits, and go about our business, trying to avoid aggravating someone who appears not to have a firm grasp on reality.

Then we find that the man is a teacher is our children's school and is telling them that his unicorn is real, that they should not eat wheat on Wednesdays and other rules about how to live their lives which he cannot substantiate, other than by claiming his invisible unicorn told him so, and the children must believe him.

So now we are angry that our children are being indoctrinated and ask the school to stop him. When we find that the school governors are unicorn believers too, that none of them can prove the existence of unicorns either, but fully support the indoctrination of our children, we are outraged. We speak to local politicians and media, and mount a campaign to stop this silliness. But then the government, many members of whom turn out to believe in pixies or leprechauns, equally without foundation, object that we are trying to restrict people's right to believe what they choose to believe, and criticise us for being arrogant and intolerant.

We hold our heads in our hands, wondering how these people can be so deluded, and how we can have our children taught math, English and science, without all this mumbo-jumbo. We realise that it is we who are in the minority, and the world deluded.

What should we do?

Posted by Billysugger at 12:17 No comments:

Does a computer use more electricity when charging USB devices?

I was introduced to this fascinating question, and its intriguing proposed answer, by David Bradley.

It was suggested that because the efficiency of a power supply increases as it is loaded to its design output power, it is possible to draw 5W of power to charge a USB device, while taking less than 5W of extra power from the wall outlet.  While that sounded reasonable on the face of it, I wondered if the idea represented better use of existing power, or actually getting something for nothing.  So as an electronics engineer with an interest in physics, I did some calculations to find out. Here is the response I posted:

YES; you'll always pay for the USB power with at least that much more power from the wall. Not only is this required by the laws of thermodynamics, it's also inherent in the way power supplies work.

We'll take the whole system of the computer, its internal power supply, its operating circuits and the USB port circuitry to be one big, black box called the Supply. For the purposes of this illustration, the whole computer is one oversized USB charger, with two outputs: the computer operating power, which we will call Pc, and the output USB power, which we will call Pu.
Converting power from one form, (voltage, current, frequency), to another, and conducting power from one part of a circuit to another, are all physical processes which are less than perfect. Even in an ideal world, with superconductors and yet-to-be-invented components, the circuit can be no better than perfect. (The importance of this subtle message will turn out to be the key to this answer). If you want 1W out of a circuit, you must put in at least 1W, and in all practical cases a bit more than 1W. That bit moreis the power lost in the conversion and is called loss. We will call the loss power Pl, and it is directly related to the amount of power delivered by the supply. Loss is almost always evident as heat, and is why electronic circuits which carry large power levels must be ventilated.
There is some mathematical function, (an equation), which describes how the loss varies with output power. This function will involve the square of output voltage or current where power is lost in resistance, a frequency multiplied by output voltage or current where power is lost in switching. But we don't need to dwell on that, we can wrap all that irrelevant detail into one symbol, which we will call f(Po), where Po is the total output power, and is used to relate output power to loss by the equation Pl = f(Pc+Pu).
A power supply is a circuit which requires power to operate, even if it is delivering no output power at all. Electronics engineers call this the quiescent power, and we'll refer to it as Pq. Quiescent power is constant, and is absolutely unaffected by how hard the power supply is working to deliver the output power. In this example, where the computer is performing other functions besides powering the USB charger, we include the operating power of the other computer functions in Pq.
All this power comes from the wall outlet, and we will call the input power, Pw, (Pi looks confusingly likePl, so I switched to Pw for wall-power).
So now we are ready to put the above together and get a description of how these power contributions are related. Well firstly we know that every microwatt of power output, or loss, comes from the wall. So:

Now we can simplify this by eliminating the same terms on both sides of the minus sign and removing the brackets:

then by subtracting Pu from both sides of the inequality (< sign):

Here is our absurdity. What this result means in plain English is:

This means negative resistors, negative voltages dropped across semiconductor junctions, or power magically appearing from the cores of inductors. All of this is nonsense, fairy tales, wishful thinking of perpetual-motion machines, and is absolutely impossible.

It is not physically possibly, theoretically or otherwise, to get power out of a computer USB port, with less than the same amount of extra power coming from the wall outlet.

With the greatest respect to @zakinster, he has misunderstood the nature of efficiency. Efficiency is aconsequence of the relationship between input power, loss and output power, and not a physical quantity for which input power, loss and output power are consequences.
To illustrate, let's take the case of a power supply with a maximum output power of 900W, losses given by Pl = APo² + BPo where A = 10^-4 and B = 10^-2, and Pq = 30W. Modelling the efficiency (Po/Pi) of such a power supply in Excel and graphing it on a scale similar to the Anand Tech curve, gives: 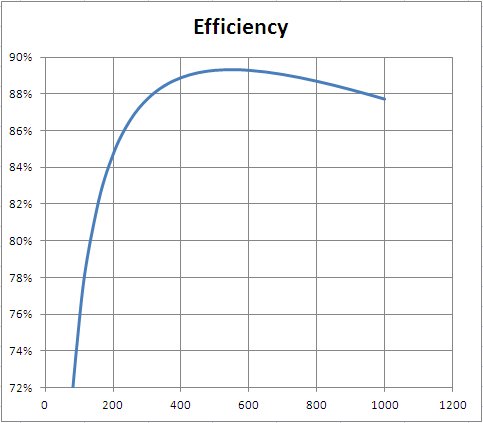 This model has a very steep initial curve, like the Anand Tech supply, but is modelled entirely according to the analysis above which makes free power absurd.
Let's take this model and look at the examples @zakinster gives in Case 2 and Case 3. If we change Pq to 50W, and make the supply perfect, with zero loss, then we can get 80% efficiency at 200W load. But even in this perfect situation, the best we can get at 205W is 80.39% efficiency. To reach the 80.5% @zakinster suggests is a practical possibility requires a negative loss function, which is impossible. And achieving 82% efficiency is still more impossible.
For summary, please refer to Short Answer above.